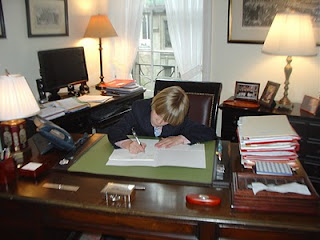 ... more than others.  Today was one of those days -- Headmaster for a Day -- a day that someone else carries the heavy mantle of power!  My third grade companion, Jackson B. began this day early in the morning welcoming everyone to school with a handshake and a smile.  After some 500 handshakes it was off to 7th and 8th grade Chapel to hear Mr. Kilkeary deliver an eloquent, morally rich reason why we should all "love our neighbor".  Following another round of handshakes beneath the "frescoed" Shepherd David, we took a tour of the classrooms to announce the much anticipated "HM For a Day Policies" -- always a highlight of this special day.

We began these announcements in the Pre-kindergarten and worked our way up through the school to the 8th grade.  It is fair to say, in response to the first of the policies announced by the Headmaster -- no homework tonight, not a stitch -- that our ascent in altitude was equally calibrated with the applause and cheers that grew in volume and intensity with each passing floor.  To ensure that this policy was fully executed by the faculty and understood by the boys, Jackson made sure that not a single remnant of "homework evidence" was left on any whiteboard in the school, calling upon a lucky boy in each classroom to rise and come forward to the board for a "ceremonial erasing of the homework"-- and each did to excited cheers, great fanfare and the elation of his peers.

It was only later, over a power lunch at Mars 2112 on 51st and Broadway, that I learned from one of Jackson's invited guests that this was all, obviously, part of a far greater, more elaborate plot.  "Research confirms, Dr. O'Halloran," my little friend announces passionately as I begin sipping my Diet Pepsi, "that homework before the 5th grade results in absolutely no substantial gains in knowledge.  There is no benefit to homework at a young age; therefore, we should abolish it!"  It became quickly clear that my three lunch companions had conspired; my power lunch was moving in a dangerous direction.  But not to worry, I thought secretly to myself, we were at Mars 2112.  How bad could it get!  With freaky looking Martians moving around this darkened cave-like enclosure illuminated, if only barely, by a mix of hues from the red light spectrum, and an unusual pill type object hanging high above our heads that changed colors randomly and for what seemed to be no apparent reason, it was hard to take anything too seriously.  I just had to stay relatively quiet, keep my opinions to myself, and pray that that the soon to arrive Martian food would move the conversation in a whole new direction. 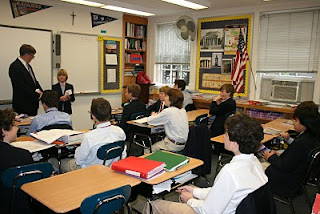 The second policy involved a casual dress day in the later spring, and the third, my personal favorite, was for each boy to record an act of kindness or a good deed, as many as each boy wanted or could do this week.  It was to be written on an index card and handed in to their homeroom teacher.  The homeroom teachers will collect all the kind acts and good deeds done throughout the week and share them with their classes in a special session this Friday--that's 403 boys doing multiple acts of kindness and good deeds for a week.  Jackson, in his first leadership role, has left an indelible, memorable mark on this institution.

Other duties and activities consumed the remainder of the headmaster's day, including the reading, with great poise and pacing, intonation and expression, of Elmer to the PK.  After taking a few questions from extremely well-behaved, and quite inquisitive 4 year-olds, it was on to a series of meetings and appointments, including the important power lunch at 2112 previously mentioned and a tour of the "secrets" of the school.  Jackson also met with important administrators and planned some of the layout for the next Saint David's Magazine.  He also wrote a few letters on official stationery. 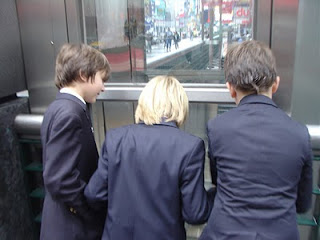 I enjoyed my day with Jackson tremendously.  It reminded me of how much I love my job, the joy of childhood, and the unique and special place that Saint David's School is.  Jackson was a respectful, responsible, and intelligent headmaster.  It was a pleasure serving Saint David's School with him today.

In the first photo above, Jackson executes at the Headmaster's Desk.  In the second, we see Jackson announcing policies to a 7th grade class.  In the third photo, Jackson and his guests are looking for the elevator at 51st and Broadway.  To their great amusement, it just never comes! In the final shot, Headmaster Jackson is seen, in full control, reading to the PK. 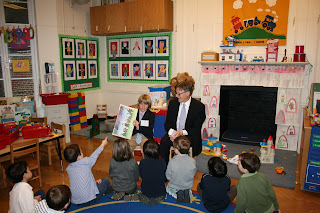