April 27, 2010
Inside the magnificent Veterans Room at the Park Avenue (7th Regiment) Armory Thursday evening last, Sam White presented a captivating talk on the life and work of his grandfather Stanford White.  It was a fitting venue for this 4th annual social event organized by the Alumni Parents Council under the dedicated leadership of Dorothy Faux and Linda Foran.  With more than 100 people in attendance, Sam not only explained in detail the room we were occupying, designed by his late great grandfather, but also walked us through his great grandfather's life's work--the Farragut Monument, Villard House, Payne Whitney House, Church of the Ascension, Newport Casino Theatre, Metropolitan Club, Madison Square Garden, Prison Ship Martyrs Monument, The Century Association, Herald Building, NYU's Guild Library, Tiffany and Co., NY, to name a few. 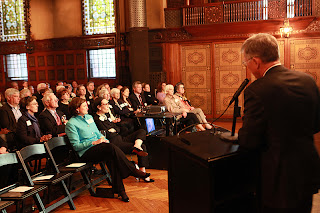 The Seventh Regiment was known most famously for its service during the Civil War.  Its Armory is an incredibly interesting New York City landmark.  Within it, the Veterans Room, designed by White and his firm in the late 1870s-early 1880s, has been described as "Greek, Moresque, and Celtic, with a dash of Egyptian, Persian, and Japanese."  The Veterans Room and adjacent Library capture White's distinctive style and the Regiments unique character.  An architect that incorporated an eclectic array of media and style, White is credited with an American architectual movement.  His life, as Sam states in his book, was "extravagant" and his death "sensational," tragic.  At the height of Stanford White's influence and impact, an assassin's bullet took his life.

Sam, an alum from the class of 1960 is one of five brothers that graduated from Saint David's in the late '50s through early '60s.  Sam and his wife, Elizabeth, co-authored the book Stanford White: Architect.  The Council hosts several events each year aimed at bringing the extended Saint David's community together.  Listening to the incredible story of Stanford White as told by his great grandson inside the room he designed at a defining time in American Architectural and cultural history was a classic New York Moment.  In my opening remarks that evening welcoming Sam, I quoted his headmaster, Mr. Hume, "Sam was one of our earliest graduates to go on to such incredible success."  That success was truly evident this night.