Champion of the Common Good 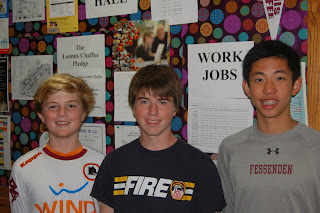 ﻿Recently recognized by his current school, Loomis Chaffee, William H., Saint David's alum '13, has taken the mission of his alma mater and exercised it with tangible impact.  From the Loomis' school magazine:

"On a Saturday, three freshmen boys approached a faculty member and turned in a large sum of money. The money was said to have been found in the meadows, dropped by some unknown individual, and was discovered by these freshmen boys: Will H. [and two others].

"Instead of keeping the money, they decided to hand it in. This act displays great self-control, as well as admirable honesty. When asked about their mindset when they found the money, they reflected upon how they only thought about finding the nearest dean or faculty member and never even considered taking the money."

Congratulations, Will for flying the flag so high.