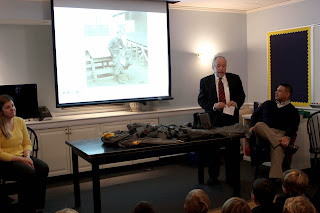 On this day when we remember and honor all who have served and sacrificed for our country, two veterans spoke to our second graders about their service. Jack Sproule, Director of Finance and Administration, spoke of his time in the Vietnam War; Cesar Sanchez, husband of second grade teacher Courtney Sanchez, presented on his two deployments with the Navy on the USS Constellation, an aircraft carrier deployed in the Persian Gulf.

Not present, but also honored, was former master teacher (and now development associate) Tom McLellan, who served in Korea.

The presentation was followed by a question and answer session, and the boys were encouraged to talk about Veterans Day with their families this evening.  Later in the day the boys wrote letters to Mr. Sproule and Mr. Sanchez, posing further questions and also expressing their thanks.

As a school, we express our gratitude to Jack, Cesar, and Tom, and to the following Saint David's alumni who have served in the military: