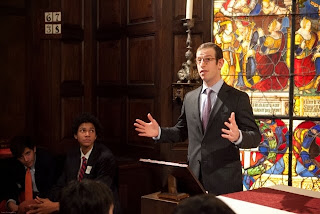 A chilly, driving rain didn't deter a record number of alums in secondary school and our current eighth graders from attending last night's Young Alumni Chapel talk and Dinner--a Thanksgiving tradition that provides an opportunity for our eighth graders to share an evening with alumni who are in high school.

In his Chapel talk, which opened the evening, Lucas Jenkins '04 focused on the meaning of the school's motto, our mission's ultimate aspiration "...that they be good men." Addressing the Class of 2014, he said they had "a great opportunity to be school leaders" in living the mission. 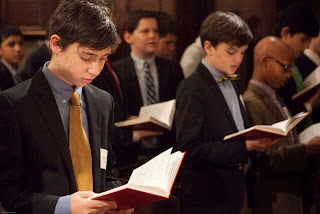 Lucas then reminded the young alumni present of their "privilege and responsibility to represent the school, to carry its motto and live up to it on a daily basis." He also noted that oftentimes making the right choice, or doing the right thing, isn't easy, and that "a good man acts accordingly, not when it is expected, but when it is difficult to do so."

Afterward, we all enjoyed a pre-Thanksgiving dinner in Hyman Hall during which former Student Council Presidents Skakel '13 and Jack '12, presented Anne Marie Fox and Josh Springer, representatives from Save the Children, and Mimi O'Hagan, of Mimi's Building Blocks, with a check for $37,000 representing the money the boys worked hard to raise during the third year of Saint David's school-wide project to build an elementary school in Ethiopia. 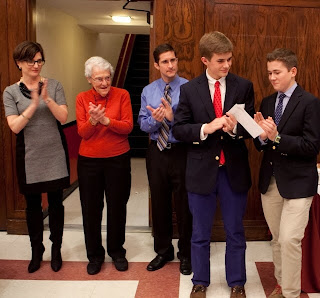 Fully funded, The Saint David's Kalina School opened in September. Anne Marie and Mimi, who recently visited Kalina, spoke of the excitement and joy the community has for their new school and of their deep appreciation. Said Anne Marie: "You gave them the gift of opportunity, they give you the gift of gratitude."

What a beautiful truth and wonderful Thanksgiving message for our boys! 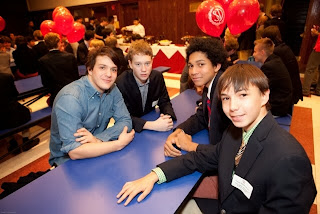