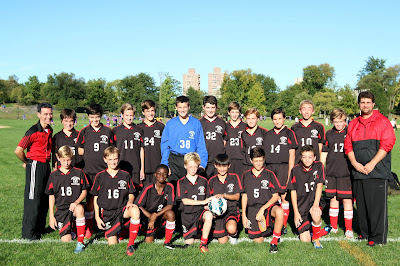 Yesterday's White and Red team matches against St. Bernard's in the North Meadow of New York's famed Central Park were a spectacle to behold.

Both matches were highly competitive, with our boys exhibiting impressive skills.

White's game ended in a 1-1 tie with one of the highlights being the impenetrable back line.  St. Bernard's keep pounding away at the White defense, but it held strong.

For Red, the game ended in a 3-1 score in St. Bernard's favor.  Here, the aggressive front line repeatedly penetrated the St. B's defense throughout the game, pushing right up to the goal on numerous occasions.  The ball just wouldn't go in.  The slope of the field, against us in the second half, also provided St. B's a slight advantage.  Pushing upgrade, especially in the second part of a game is never fun!  The boys fought hard though, never losing hope.  It was impressive soccer. 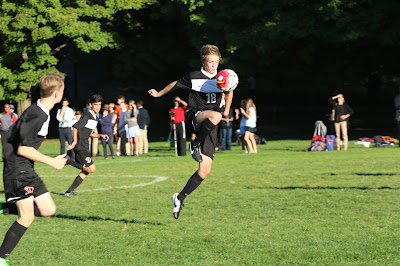 I was proud of the way Saint David's boys, guided by their expert coaches, handled themselves on the field, always taking to heart our focus on honoring the game and exhibiting good sportsmanship, in addition to displaying impressive skills.

Unfortunately, due to unexplained circumstances, Charles Osgood, long time supporter of Saint David's, never arrived at the North Meadow, although two fifth grade boys swore to me they noticed a distinguished gentleman by the Saint David's goal in the dying minutes of the Red game.  When I looked up, the shadow created by a small hillock interrupting the setting sun to our west, made the figure incredibly difficult to identify.  It could have been anyone.  At the final whistle, a second glance toward the goal resulted in my seeing nothing--no shadowy figure, no distinguished gentleman.  Was it Osgood?  That I cannot say, but your Cup, Mr. Osgood, remains upside down!  Until we try again .... next year! 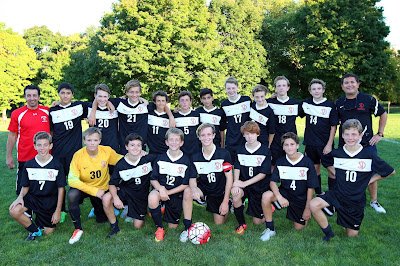