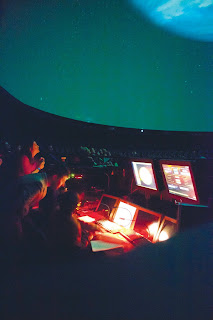 Is there life on other planets? How many stars are out there? What does it mean that the universe is expanding? Throughout human history, we have gazed into the sky asking questions, looking for patterns, struggling to understand what we see and what it means.

It’s no wonder we are compelled to investigate the universe. As famed astrophysicist and Director of the Hayden Planetarium, Neil deGrasse Tyson, reminds us, in our very essence, we ARE the universe:

“Recognize that the very molecules that make up your body, the atoms that construct the molecules, are traceable to the crucibles that were once the centers of high mass stars that exploded their chemically rich guts into the galaxy, enriching pristine gas clouds with the chemistry of life. So that we are all connected to each other biologically, to the earth chemically and to the rest of the universe atomically... We are in the universe and the universe is in us.”(1)

During the winter, the “Digital Universe” unit, a first-of-its-kind partnership between Saint David’s and the American Museum of Natural History, invited Sixth Grade boys to pose and investigate their own questions about the cosmos. The partnership fits into the sixth graders’ study of astronomy during the winter term in science. This was the first time that the AMNH partnered with a school for the program. The partnership allowed boys access to the research-grade tools and deep discipline expertise of the museum’s educators and astronomers, combined with Saint David’s teachers’ ability to create active, engaging learning experiences informed by best practices for teaching boys. 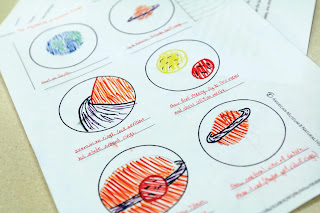 Over the course of four extended field-study visits to the museum during the winter term, our sixth graders investigated the cosmos using UniView, the front-end software that interfaces with the Digital Universe Atlas: a vast aggregation of astronomical data captured through advanced telescopes by dozens of organizations across the globe and represented in virtual 3D.

Students learned to use the digital tools to virtually “fly through” the universe. Working in pairs, boys posed research questions of particular interest. Where can we find evidence of the Big Bang? What astronomical conditions allow Earth to support life? Are there similar planets that might also support life? During field study visits, and in science and English classes back at Saint David’s, boys built arguments from evidence found using the Digital Universe Atlas, museum exhibitions, and online databases and journals available through the Saint David’s library.

With support from English teacher, Karen Davis, and guidance from museum astrovisualization experts, boys translated their research findings into a gripping narrative paired with cutting-edge multimedia visuals, in the form of a planetarium show. Finally, in March, in front of an audience of classmates, faculty and parents, the boys took turns climbing down into the control booth of the Hayden Planetarium and performing their shows, live, using the same sophisticated tools used by planetarium professionals. 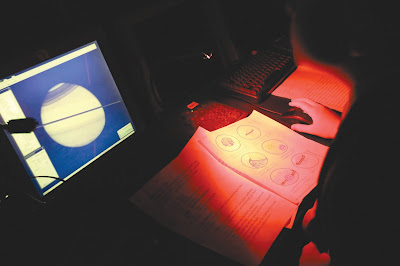 The boys took us on flights around our solar system and beyond, through galaxies, and out to the edge of the observable universe, billions of light years from Earth. Along the way, as they treated us to breathtaking images of planets and moons, they told us stories that wove together salient information about their topics. They answered their questions and posed new ones, inspired by their in-depth study of the universe.

The Digital Universe unit is the latest in a series of successful partnerships that Saint David’s has forged with local cultural and research institutions including, The Cold Spring Harbor DNA Learning Center, The Gilder Lehrman Institute of American History, The Metropolitan Museum of Art, The New-York Historical Society, and The Frick Collection. These partnerships provide a bridge that explicitly connects the boys’ scholarship in the classroom to vital work being done by scientists, historians, and art historians in their respective fields. These experiences add an unparalleled depth of meaning and authenticity to the boys’ studies. (2)