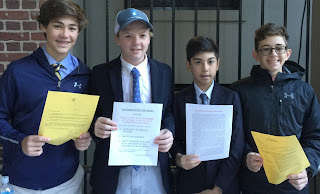 A Coke machine. The Turkey Run. Pioneer Supermarket. What do these have in common?

The Thanksgiving Food Drive. Our school's longest running social action project and one that is near and dear to current families and alumni alike, turns 50 this year.  Spearheaded by the Eighth Grade, it involves the cooperation and effort of all of our boys and culminates with the delivery of turkeys, holiday meat and groceries to three local churches on the day before Thanksgiving.

The Drive kicked off this week: Eighth graders have delivered empty boxes to each classroom. Our Lower School boys will work enthusiastically to fill them with canned goods. Eighth Grade boys will also make rounds for donations to purchase turkeys, and the pies they sell will supplement the turkey fund. 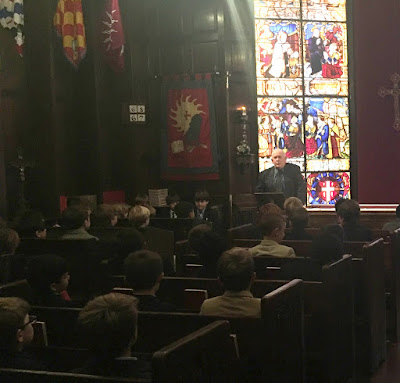 Tom Ryan who, with Gene Romanosky, guides the boys in the social action project gave a Chapel talk to the third and fourth graders yesterday about this great tradition. 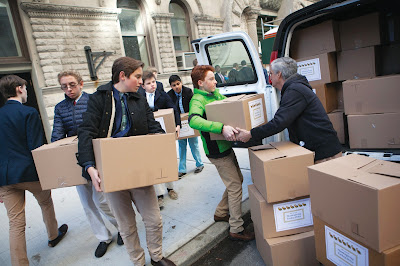 The Food Drive dates to 1967 when Mal Cleary, Assistant Headmaster at the time, began it with four boxes of groceries donated by our boys and delivered to the nearby Little Sisters of the Poor, nuns who cared for the nearby sick and needy. Bob McLaughlin and Mal Cleary expanded the project to include the collection of turkeys as well as canned goods, delivered to a storefront for the poor on 129th and Madison.

Later, Monsignor Tom Leonard's Incarnation Parish became the main recipient of our boys' generosity, and remains so to this day, joined by two staff members' churches: Bethel Community Church, and Lion of Judah Assembly. Last year, our boys collected 7500 cans, which filled a record 252 boxes and sold over 600 holiday pies.

As observed by Mr. Ryan: "The eighth graders, in cooperation with the rest of the Saint David’s community... have ventured not so gently into the world of Christian charity and awareness, and have taken some of their first steps toward becoming good men."

Regarding that Coke machine, Turkey Run and Pioneer? You'll find the connection in Tom Ryan's history of the Thanksgiving Food Drive.  Happy reading.