Saint David's Philharmonic Ensemble performed in "A Festival of Orchestras" at Carnegie Hall this past Sunday afternoon.  It was a proud day.  The average age of the members of most orchestras on the stage Sunday would have to have been 14-15 years, for Saint David's it was 11--and we were the smallest orchestra in number by far too--but boy did the boys make up for it in performing an incredibly challenging repertoire beautifully.  Carnegie Hall's packed house was in awe! 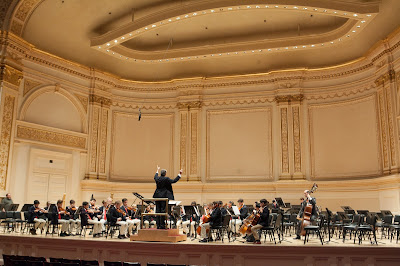 What a performance! In that venerable venue our boys, joined by alumnus Justin C. '13 (who is Concertmaster for Collegiate's orchestra) played with passion, confidence and acumen, presenting Mouret's Rondeau, Khachaturian's Sabre Dance, and Tchaikovsky's "Little Russian."


I am so proud of all of the boys in our Philharmonic Ensemble; they have worked together diligently since September, learning and perfecting a challenging selection of music, and their professional comportment on Sunday was remarkable.


The Festival of Orchestras at Carnegie Hall occurs every three years and includes stellar performances by the Middle and Upper School Orchestras of Brearley, Collegiate, Packer Collegiate,  Rudolf Steiner and UNIS.