Exciting updates on our consolidation/expansion project!

Over the Christmas break, the construction team completed the demolition of the rear portion of Graham House.


The front portion of the building including the landmarked façade remains, with an even larger empty space behind hidden from the street.


As of December 30, 2016, the footing excavation and underpinning were nearly complete and ready for our next major steel delivery and crane pick which is scheduled for Saturday, January 14th and Sunday, January 15th.

To allow for the weight for the new structure, the school needed to excavate down to a level of Manhattanite rock which could carry the tonnage.  In the photos below, you can see the new footings dug out and the necessary beams which will be tied into the forthcoming steel. 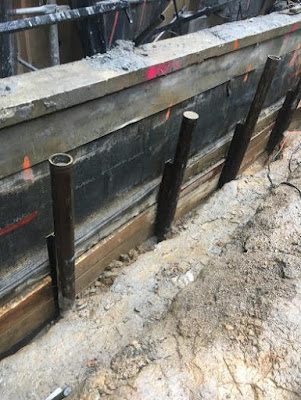 In advance of steel erection later this month, the old elevator shaft in Graham House is being demolished.  This will add even greater stability to the existing wing along 89th Street.  The shaft was used throughout the summer as a chute for debris during demolition.

The steel will be dropped into the newly poured footings on the foundation level of Graham House by a crane that will be erected on 89th Street.  In fact, the crane necessary to lift the steel up over the 1880 facade and deliver it to the mid-block location is so big, we need a second crane to erect the first.

As the steel is picked, placed and webbed together, the new classrooms, labs, gyms and performing arts center will begin to take form, shape and, by the fall of 2018, all things being equal, life.

We remain on schedule with all systems go.  Disruptions to the Saint David's program have been minimal because of the tremendous professionalism of our faculty and staff and our contractors.