Views from Space: An Evening with Astronaut Mike Massimino

May 15, 2017
"From orbit: Launch was awesome!! I am feeling great, working hard, & enjoying the magnificent views, the adventure of a lifetime has begun." --the first tweet ever sent from space, by Astronaut Mike Massimino, @Astro_Mike, @astromikemassimino (Instagram) 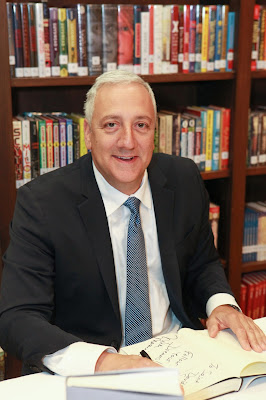 Good men are always curious, keeping their minds open to the world around them and always asking questions. Who better than an astronaut to talk about this incredible world? 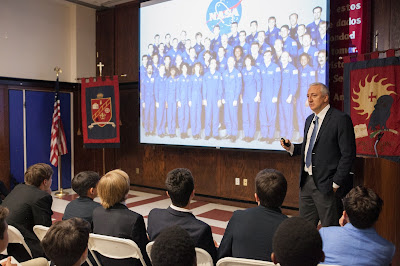 Saint David's was honored last night to welcome former NASA astronaut and author Mike Massimino, Ph.D., to share with our Eighth Grade boys and our alumni/alumni parent community the story of his becoming and being an astronaut, and the lessons he learned along that journey.

Mike dreamed of exploring space after witnessing as a young boy Neil Armstrong's first steps on the moon. However, while he loved physics and engineering, he was reluctant to enter the space program because he didn't consider himself daring enough. At one point he realized that his dream of exploring space wouldn't go away, telling us, "I knew deep down that I could not live with myself if I didn't try." 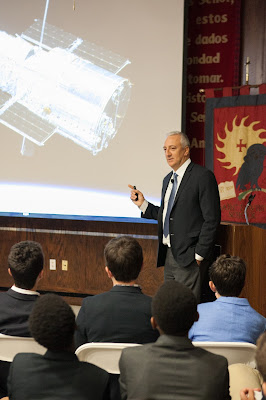 His determination endured despite three rejections by NASA.  On the fourth try, he was accepted and began his 18 years as a NASA astronaut, during which he participated in two space flights to the Hubble Space Telescope on servicing missions. His message to the boys: "It's okay to be rejected; it is not okay to give up!"

The presentation was fascinating for boys and adults in the room alike, complete with astonishing visuals of space and earth, as seen from the Hubble. Most impressive though was Mike's candor: he shared his fears (heights), struggles (passing the swim test during training), and challenges (facing problems in space that weren't anticipated or encountered in training). Above all else, Mike noted that being part of a supportive team is essential to success: "Teamwork is the most important thing in space and in life. You win or fail as a team." 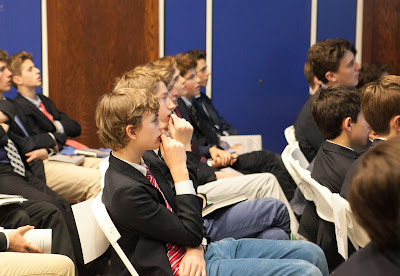 In his final comments to the boys, he told of one night when he was a graduate student. While making dinner he looked up at the television and saw that the news was featuring a space shuttle flight that depicted astronauts in the background. At that moment although he knew he really wanted to be an astronaut, a voice inside said he would never be able to be one. He did not listen to that voice, did not let it stop him. 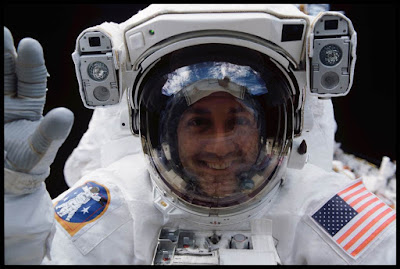 "It wasn't impossible, it was improbable; but there is always that small chance, even if it is just a "one" at the end of a string of "zeros." As long as you don't give up, there's always a chance," he told the boys. 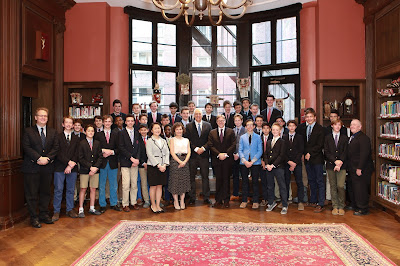 Our boys thoroughly enjoyed the incredibly rare opportunity to interact with a real-life astronaut, and each one left with an autographed copy of Mike's book, Spaceman, and much to contemplate. 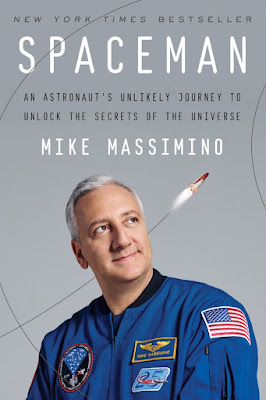 Mike's is a story of perseverance, of overcoming self-doubt and fear, remaining determined and positive, embracing teamwork, and possessing boundless curiosity about and reverence for the world. Fine messages for our boys and for all in the audience!