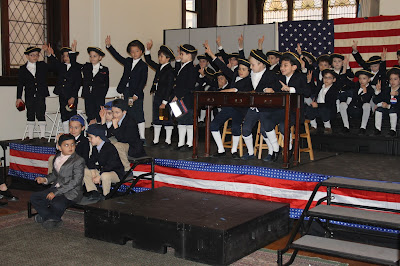 Right before spring break our second graders took to the stage with their rousing production of Huzzah! Huzzah! The original show, written by a former Saint David's faculty member, is an account of the Continental Congress's adoption of the Declaration of Independence on July 4, 1776.

The boys played famous American figures such as Thomas Jefferson, John Hancock and Patrick Henry, and the representatives' animated deliberations were interspersed with the singing of American classics like "Yankee Doodle Dandy" and "You're a Grand Old Flag."

It was a grand old time, and a great way to bring to life the boys' study of the Revolutionary Period in America.