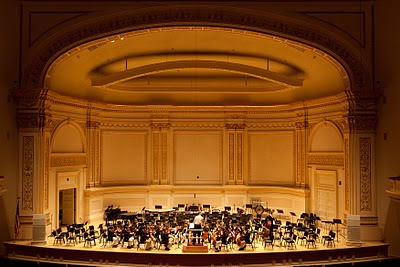 There were two championships played yesterday--one musical and one not!  The Saint David's Philharmonic Ensemble, under the direction of Phil Hough, performed on stage at Carnegie Hall at 2 PM to a packed, enthusiastic house.  Saint David's was the smallest orchestra in size to take the stage Sunday, but without doubt, the greatest in determination and heart.

It was an ambitious, classically oriented program—Haydn's St. Anthony Chorale, Mozart's Symphony No. 25, Verdi's Overture to Nabucco, and the Theme from Mission: Impossible by Schifrin—that the boys performed with grace and poise.  What talent!  The Mozart piece is a difficult one.  The boys had struggled with it for the past year or so in preparation for this performance.  Yesterday, they played No. 25 the best they have ever played it.  Mozart would have been proud.  In the end, Sunday was a celebration of music and another fine example of Saint David's boys appreciating the aesthetic.

In the photograph above, we see the boys during rehearsal around noon on Perelman Stage under the direction of Maestro Hough.