February 19, 2011
Friday, February 11, 2011, was a day the School's mission shined brightly from the eyes of Saint David's boys, and was deeply reflected in the powerful emotion portrayed on the faces of their parents, Saint David's alums, and their parents.  It was a memorable day that marked an important milestone moment for Saint David's School. 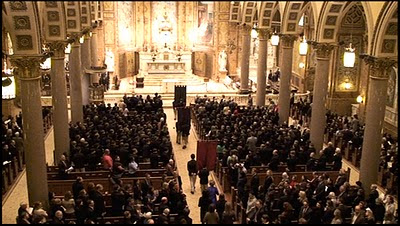 I'm not sure the Sixtieth Anniversary Mass could have been more moving.  One thousand or so celebrants--boys, faculty, trustees, parents, alums, alum parents and friends--filled The Church of Saint Ignatius Loyola on 84th and Park to the brink of its capacity on what turned out to be a beautiful mid-winter morning.  The heart and soul of Saint David's took center stage through letters and music.

February 5th, 60 years ago, the founders of this school realized their long-held vision to create an independent school "to provide a sound, substantial education for the growing boy equal to the best to be derived from institutions of a similar level, in an atmosphere based on the fundamental principles and practices of the Roman Catholic faith."  They were bold, these founders.  They were strong.  They were visionary.

For too many years, the founders had thought they had sat back and accepted the fact that there was no independent, private school in the city in the Catholic tradition.  This seed of an idea, to establish just such a school, that had germinated in their minds for so long, finally took root that day.  The long struggle to establish the school without money, teachers, a headmaster; without a physical space to call home, and without students, finally came to an end.  Money was raised, space acquired, and teachers found.  Saint David's was born.  The doors opened and four boys walked through.

Today, we celebrate the school's founding and its mission not only by honoring our past, but by looking toward our future, defining the relevance of the School's mission in a new century.
From his opening joke about the Jesuit, Benedictine and two diocesan priests to his moving, historical retrospective on the founding and history of the school, Father Katsourus captured the mood of the day and the importance of the moment.  He was marvelous.  In his homily, our Chaplain, quoting Gandhi, called for the boys to be the change they want to see.
At its core, the mission of Saint David's calls upon its graduates to be agents for the greater good.  The final phrase of the mission "ut viri boni sint" captures this unequivocally.  In our quest to fulfill the other mandates of our mission--rigorous academic pursuit, critical analysis of ideas and ideals, deliberate moral introspection, intellectual curiosity, and exercising a classically informed balance in the aesthetic, scholarly, athletic and spiritual dimensions to learning and life--this call to individually take responsibility, to take action, and change the world for the better is what the 60th anniversary reminds us of. 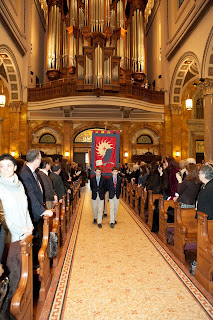 All in attendance were treated to an incredible spectacle, including the spiritually uplifting and moving music directed and coordinated by Mr. Moore and Ms. Clark; the well-organized Mass and clerical logistics orchestrated by Mr. Barbieri; the safe and smooth bus dispatching and receiving by Mr. Morales and Mr. O'Carroll; the delicious food by Chef Whittle; the speedy movement of equipment and accessories by our ever ready Maintenance Department; the thoughtful and efficient preparation of gifts for honored guests, programs, scripts, and final logistics by Mrs. Formosa and Mrs. Hopkins; the impeccably efficient scheduling of all aspects of Thursday's rehearsal and Friday's main event by Mr. Kinsella; the commitment of all the coaches and teachers assigned to homeroom support and intersection crossing safety; the calm professionalism and cooperation of homeroom teachers; the oversight of all the school's cabinet level administrators; and the overall competent and dynamic 60th Anniversary Committee leadership of Mr. Dearie.
Saint David's took especially great pride in the behavior and performance of her boys--from altar servers, vexilifers, and readers to soloists, violinists, congregants, and bell players--they participated superbly.
Here follows the names of the School's founders: