The Trial of Socrates

February 11, 2011
Socrates was widely recognized as the first martyr for free speech. Yesterday morning, 7th grade boys performed convincingly the 399 BC Trail of Socrates. In classical Greek form, the play reminds us of several important notions central to democracy.  Given the activity in North Africa and the Middle East, it's an apt play for the 7th grade and their audience. 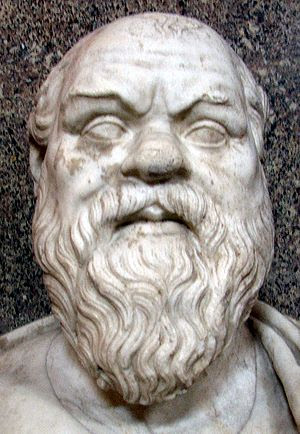 In a great exchange between Lycon, one of Socrates' accusers, and a juror, early in the trial, Lycon says, "Socrates walks around Athens daily asking continual questions of its citizens. These are designed to tear down, but never build. He rejects every answer but gives none of his own. In fact, after being asked for an answer, Socrates offers another question! The result of all this is that he confuses and demoralizes Athenian citizens. After suffering wartime losses and the tyranny of the Council of Thirty, Athens cannot tolerate more destructive acts."


The juror then responds, "Wouldn’t the denial of free speech be more dangerous to democracy than Socrates’ questions?" Lycon's answer to this was not especially memorable, but the juror's question was exceptional.  The court then asked Socrates’ pupil, Plato, to speak in defense of Socrates.  In doing so, Plato speaks first of Socrates as teacher, describing him as one who leads his students to the discovery of truth through thoughtful questioning, and then says: "According to Socrates, knowledge is the highest virtue. Without knowledge, right action is impossible. Socrates’ work leads people to knowledge and right action, something Athens needs at this crucial time in her history."


Free speech, questions, knowledge, and right action--it's not hard to see from where Saint David's draws her mission.  In this brief exchange, we see the essence of not only the school's mission, but of an educated citizenry and democracy.


The boys performed the play beautifully.  Annunciation was clear and crisp and the lines were delivered with a certain zestful, playful confidence.