Trading, Negotiating on the Road 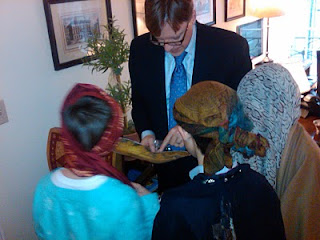 In an unusual turn of events, I found myself trading with a variety of foreign travelers today.  Representing the Eternal City, my office was a stop for ancient travelers on the Silk Road.  In conjunction with their study of ancient China, fourth grade boys spent several weeks researching and creating a character to “travel” along their own Saint David's Silk Road.  To prepare their character, they wrote journals chronicling their adventures, trials, and tribulations.

Today, on the Road, the boys encountered merchants traveling from Arabia, China, Persia, India, and the Roman Empire.  Traveling in caravans, they used maps to navigate themselves throughout the school to different key stops–trading along the way with teachers, other caravans, and trying to avoid the unruly mobs of bandits lurking in the shadows of narrow hallways and around the corners of blind turns.  In the end, they collected many sought after goods such as silk, paper, spices, and wool.

In the photo above three in a caravan try to trade some silk, spices and tea, for gold coin with Rome.  They left happy.