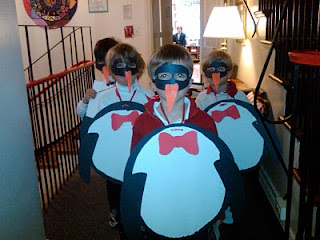 It's not every Friday that you find penguins running amuck throughout the school, atoms being consumed by 4th graders until their tummies burst, and third graders being placed in detainment after interrogatives from stone faced immigration officers, but so it was this Friday at Saint David's. 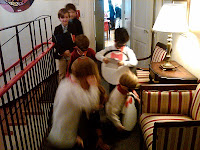 The unusual day began when I heard penguins entering the 4th floor in search of colorful, inanimate fish--something obviously they like to do.  Pre-kindergarten boys, after studying the penguin, became the very aquatic, flightless birds they had learned about.  Above, we see a waddle outside my office.  In the second photograph, we see another waddle successful in their search for sustenance while 2nd graders, surprised, come upon them. 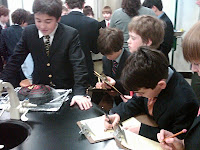 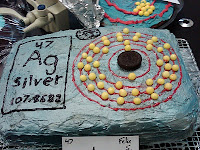 Meanwhile, up on the 5th floor, 7th grade boys were sharing the products of their collective labors with 4th grade boys.  A long standing tradition, Edible Atoms is a culminating activity for the 7th grade's study of the periodic table and atomic weight and structure of various chemical elements.  The 7th grade boys made their atoms for the 4th grade boys to first study and then happily consume.  To the right, we see Silver before it was rapidly digested, and on the left, 4th grade boys can be seen learning about the atomic structure of Carbon from Fred R.  Carbon, like Silver however, never again saw the light of day. 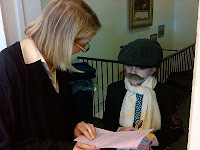 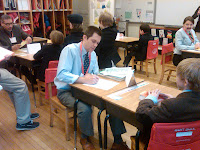 If this wasn't enough general, organized chaos, simultaneously on the 4th and 5th floors, 3rd grade boys were being processed on Ellis Island by incredibly diligent immigration officers.  After studying the history of immigration in NYC, their own families' histories, and the important role immigrants played and continue to play in the history of America, the boys and their teachers recreated the initial late 1800s immigrant experience from arrival at Ellis Island, though processing, detainment, deportation, and admission/residency/citizenship.  With everyone "in role," it was quite a sight to behold.  Friday represented a stunning example of the boys' learning "action-ized."