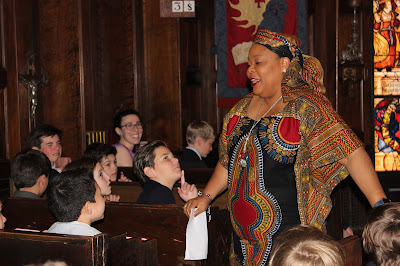 On Tuesday, Saint David's fifth and sixth graders had the honor of attending a Chapel talk given by Nobel Prize winning Liberian peace activist Leymah Gbowee. Ms. Gbowee received the Nobel Peace Prize in 2011 for leading Women of Liberia Mass Action for Peace, a coalition of Muslim and Christian women who helped to end the second Liberian Civil War in 2003.  She is the founder of Gbowee Peace Foundation Africa, which is based in Monrovia and provides educational and leadership opportunities for women and youth. 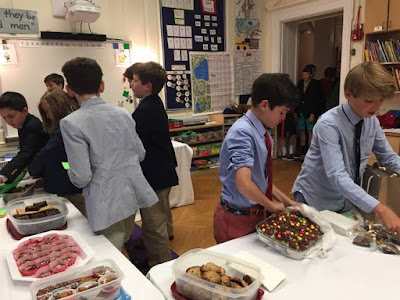 This spring as they prepared for Confirmation, our sixth graders elected to raise money for the Gbowee Peace Foundation's book bag initiative. The program provides backpacks and money for school uniforms and school supplies to high achieving Liberian children in need.

The boys calculated how much money would be required to purchase a backpack and fill it with the requested school supplies. Based on the money they raised through a bake sale, they figured out how many filled backpacks they could donate. With the assistance of their teachers Emily Einhorn and Joe Shapiro, the boys ordered the bags and school supplies. During religion class next week, they will pack the bags and ship them to Liberia, along with notes for the students. The boys raised enough money to purchase 48 bags and contribute $1000 for uniforms. 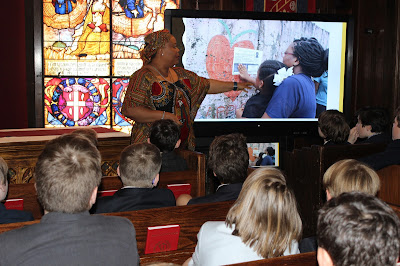 During Chapel, Ms. Gbowee thanked our boys for their efforts and told them that the students who receive the backpacks would be encouraged to write back and send pictures to the boys.

Ms. Gbowee imparted important messages to our boys: a woman of strong faith, she spoke of how she gives back to God through her work, and shared with them her love for her country and its strong community bonds. Of her foundation's work, she noted that the biggest challenge lies in trying to meet the educational needs of the students, which frequently also include food and lodging: "Young people suffering because their basic needs are not met is a real challenge; we are trying to take care of the holistic needs of these students." 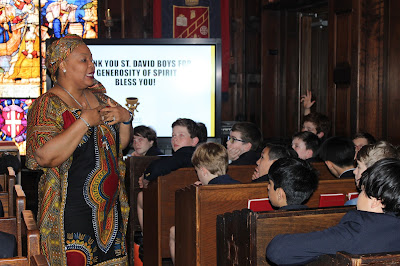 The boys asked her several probing questions, including whether she would have changed anything in her life, in particular the hardships she endured. Her response was, "Absolutely nothing. As you go through life you will fall down and bruise your knee; you have to stand up." She defined a strong person as one who, when going through times of trial, of weakness, is able to save himself.

The Chapel concluded in typical African tradition, with a bit of storytelling that contains a nugget of wisdom about the boys' power over their future; a clip is featured below.

Our boys look forward to corresponding with the fellow students who receive the backpacks. The opportunity to interact with Ms. Gbowee after learning about her activism and foundation's good work enable the boys to attach deeper meaning to their service project. In the end, doing good is all about forging ties among people near and far. Connections to others who, like Ms. Gbowee are agents for good in this world, provide a powerful, lasting impact. 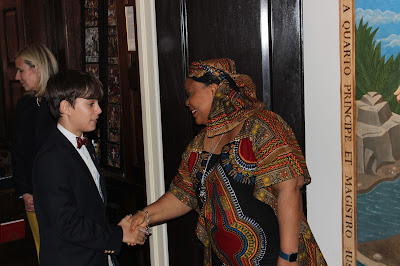