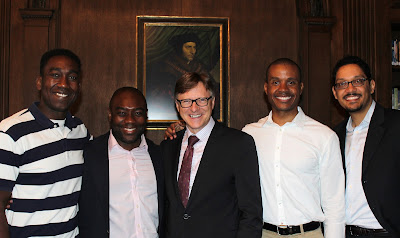 This morning, four of our alumni who participated in the Prep for Prep program returned to Saint David's for a panel discussion with our current sixth graders, who will be welcoming two new classmates from Prep for Prep in September.

Prep for Prep prepares promising young students of color from across New York City for entry into independent schools through an intensive and rigorous 14 month course of study that includes two sessions of summer school in addition to Wednesday evening and Saturday classes during the school year. 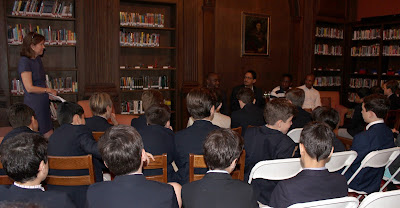 During the discussion, which was led by Director of Admissions Allison Vella, Malik Graves-Pryor '92, Omar Slowe '93, Miguel Sanchez '97 and Alex Agnant '98 relayed how they enjoyed returning to Saint David's, the warm memories they have of the school, and the lasting friendships that they forged here.

They also noted that while Saint David's was exceptionally welcoming and made the transition experience smooth, there were certain challenges inherent in transitioning to their new school in seventh grade. One was their often long commutes, which were tiring and could also make after school activities challenging. They noted that this was alleviated through their friendships with Saint David's families who lived in the school neighborhood. 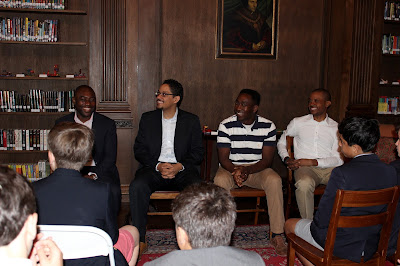 It was so good to see Omar, Miguel, Alex, and Malik. They provided our sixth graders with valuable insights into how to form and strengthen connections with their new classmates, and to continue to foster a welcoming, inclusive community at Saint David's.