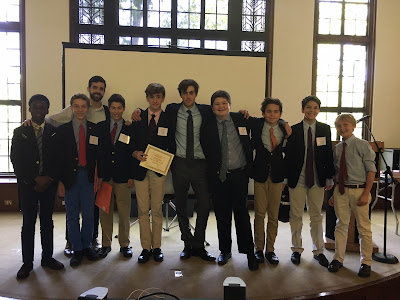 Eight members of Saint David's Model UN participated in the Fieldston Ethical Model UN Conference this past weekend. The boys, involved in committees on the Syrian Civil War, North Korea Reunification and the Somali Civil War, worked with their peers to respond to real-time crises created by the Fieldston facilitators.

The conference was run by Ryan Kelly '14 (shown in center of photo), who is a founding member of Saint David's Model UN Club, and head of the Fieldston Model UN Club. Gavin K. '18 was awarded "Outstanding Delegate" for his role as the Somalian Government.

The boys had a terrific time and are already talking about next year's conference!