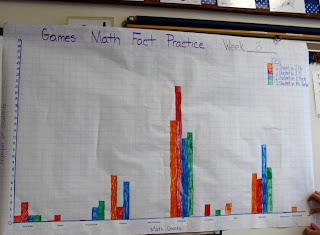 Second graders have assumed the roles of directors of analytics at a math game company in an exciting new math investigation. Over the course of four weeks, the boys have collected data based on math fact games they selected to play, and guided by their teachers, are learning how to interpret and analyze the results. Earlier in the unit, Ria Concepcion, the Director of Game Analytics for Nickelodeon, visited the boys and spoke to them about how she and her team collect data to study how people use various games, so that they can make recommendations on improvements to game developers.  She spoke to the boys also about various types of graphs, the life cycle of a game, ways to visually present data, and alpha and beta testing. Armed with these insights from an expert in the field, our boys were ready to begin their analysis of a variety of math fact games. 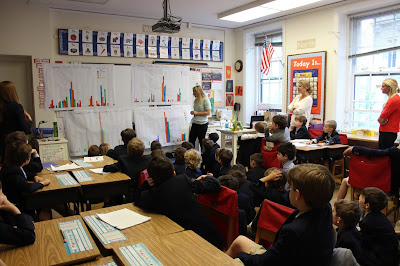 As you can imagine, they were eager to hypothesize about why the data collected indicated that a certain game was more or less popular than another.  For example, a boy proposed that one game was not so popular because it required extra materials, such as cards and another person to play with, making it more difficult to play.

Through this investigation the boys are coming to understand in a methodical, active and hands-on way, the difference between quantitative and qualitative data. The interpretation of their bar charts is leading them to move from asking "what's popular" to "why is it popular?"